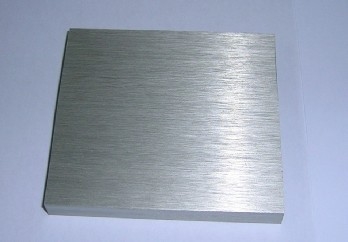 [China Aluminum Network] Weaponry is one of the fast-growing heavy industries and one of the more powerful sectors for innovation. New weapons are emerging in an endless stream. Aluminum is the basic material for the weapons industry and plays an important role in high-tech weapons.

As early as 2008, the U.S. Navy used a relatively powerful electromagnetic gun to test fire, setting a high velocity of artillery fire. The gun launched an aluminum bomb with 10,680 kJ of energy. The guns and shells of ordinary guns were launched by gunpowder blasting. The guns were charged (approximately 4 minutes) and the aluminum bombs were at a speed of 7 Mach (2500 m/s) from the orbit of the guns. Fly to the goal. Because the electromagnetic cannon is powered by electromagnetic force, and the cannonball cannot be made of magnetic metal. Aluminum is a non-magnetic material and is a good material for manufacturing electromagnetic bombs. At the same time, its density is much lighter than that of copper and lead, and it is equivalent in thrust. The aluminum bomb can fly faster and farther.

For the guns, neither traditional fire protection nor ammunition filling will undoubtedly change the traditional thinking of the Navy in the sea artillery warfare. The US Navy plans to install electromagnetic guns on the next-generation CG(X) cruiser by 2020- 2025. The U.S. Army is also studying smaller-sized land-occupied guns.

Ground-effect aircraft combines the advantages of ships and flying. It can glide on the surface with low fuel consumption. It can also travel on the ice, snow, and grass. It is superior to cost (manufacture and service) and load. Helicopters and helicopters are faster than hydrofoil and have a distinct advantage at the military level. They are not easily detected by radar and do not touch mines. Ground-effect aircraft is not a new type of weapon. It has already existed, but the recently-built aircraft is more advanced, more powerful, and more comprehensive. Therefore, it has received the attention of the military and Russia is in the field of R&D aircraft. Habitat has a comparative advantage. The materials used in ground-effect aircraft are made of aluminum. The net mass of aluminum parts accounts for about 65% of the total net mass of the aircraft. At the same time, a lot of 5XXX alloy materials are used because they have strong corrosion resistance to seawater.

The A-050 Seagull-2 Heavy Ground Effect Aircraft of the Alekseyev Central Design Bureau in Nizhny Novgorod City has a speed of 450km/h, a range of 5,000km, and a take-off mass of 54 tons. 9 tons or 100 tons, the starting engine is said to be the R-195 used by the Su-25 attack aircraft, and the cruise engine is the TV-7-117 used by the IL-114 transport aircraft. The A-050 Ground Effect Vehicle is still in the design stage and is scheduled to take off in 2022. The Seagull-2 Ground Effect Vehicle is of military value and can be equipped with an anti-ship missile. The relevant authorities stated that China is very interested in Russiaâ€™s ground-effect aircraft. In 2015, it began to discuss with Russia the purchase of several aircraft for its own military.

The peculiarly shaped Seagull-2 heavy-effect spacecraft, known as the "Caspian Monster", flies up as a bird and walks like a beast. Its huge stature is 73m long and 19m high; its speed is amazing, 500km/h; fully equipped It can carry 6 ZM-80 "white dice" heavy anti-ship missile launchers. It can destroy the US aircraft carrier battle group with one volley, which is equivalent to a missile cruiser and is 10 times faster than a cruiser.

According to Hong Kong's South China Morning Post, reported in mid-December 2016, Chinese scientists are developing a world-first new technology, hoping to allow submarines to avoid sonar detection underwater and not be detected by the other party. Their research found that installing special aluminum alloy rings on the shell of the submarine will not reflect external sound waves. Scientists from the Chinese Academy of Sciences and Wuhan Huazhong University of Science and Technology have found that when a metal ring with multiple rings etched in grooves is used for inspection, sound waves propagate along the ring instead of reflecting, and sonar detectors rely on echoes reflected from objects to track the target. At this time, the voice could not hear anything. In terms of current technology, aluminum alloy is a preferable material for making such a ring, and it has a better price/performance ratio, especially a 5XXX series alloy.

This discovery by scientists was published earlier in the worldâ€™s authoritative scientific journal â€œNature and Communicationsâ€, which has attracted the attention of scientists from other countries. Research by Chinese scientists confirms that the grooves in the aluminum alloy ring allow sound waves to propagate in a fixed direction, as if the car were driving along the highway. Multiple such rings are overlaid on the shell of the submarine according to technical specifications, and the sound waves can be dispersed almost in all directions in all directions. This will make it impossible for the sonar to detect submarines in the near future. At present, there are multiple scientific research units studying this technology, but the systems of the Chinese Academy of Sciences and Huazhong University of Science and Technology are relatively simple and efficient.

A sweetener is a Food Additive that imparts sweetness to a soft drink. According to the nutritional value, sweeteners can be divided into two types: nutritive sweeteners and non-nutritive sweeteners; according to their sweetness, they can be divided into low-sweet sweeteners and high-sweet sweeteners; Divided into natural sweeteners and synthetic sweeteners
Sweeteners should have the following characteristics: high safety, good taste, high stability, good water solubility, and reasonable price.
Although sugars such as glucose, fructose, sucrose, maltose, starch sugar and lactose are natural sweeteners, they are widely used as food and are important nutrients. They are generally regarded as food raw materials and are not used as food additives in China.