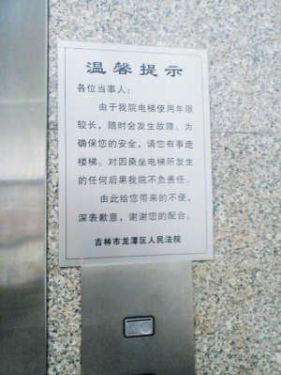 Microblog user â€œChangchun Helloâ€ stated on the Weibo on the 28th that the elevator in the Peopleâ€™s Court of Longtan District, Jilin City posted â€œlife and deathâ€ before the elevator: â€œAll the consequences of taking the elevator will not be responsible for our hospital. "Leaded a lot of netizens' attention.

The elevator in the court posted a "birth and death"

At 16:30 on the 28th, the reporter went to the People's Court of Longtan District, Jilin City. On the left side of the hall on the first floor, the reporter saw the elevator notice mentioned by the netizen â€œChangchun Helloâ€ through an iron gate.

The notice wrote: "Because of the long service life of our elevator, we will break down at any time. To ensure your safety, please go down the stairs when there is something. We will not be responsible for any consequences arising from taking the elevator. This gives We apologize for the inconvenience and thank you for your cooperation."

At the time of the reporterâ€™s investigation, the notice was lifted at 9:00 on the 29th. The reporter once again came to the Peopleâ€™s Court of Longtan District, Jilin City to interview the elevator notice. In the lobby on the first floor, the reporter was stopped by several security officers. After the registration, the security personnel called the hospital to report the situation, but they had not seen the staff of the hospital.

A uniformed man told the reporter that there was only one elevator in the hospital. The building with the elevator was 6 floors in total, and the elevator only reached 5 floors.

At 9:10 am, a woman lifted the elevator sign. The reporter followed the woman to ask at the stairs. The woman said that she was a cleaning agent in the court. â€œThis notice has been posted for many years. According to the request, we scrub the notice and we will post it later.â€

However, after a while, the reporter did not see the cleaning staff reposting the â€œscrubbingâ€ notice.

The staff of the hospital did not give an explanation at 10:31. A security guard came over to tell the reporter that they had contacted the relevant leader and arranged an interview later. About five minutes later, the reporter went to an office in front of the elevator on the left side of the first floor.

Ma Yumei, Chief of the Political Department Division of the People's Court of Longtan District, Jilin City, and Deng Wei, the Propaganda Department, received the reporter. Deng Wei said, â€œThe notice before the elevator was posted several years ago. The leaders of the hospital met in the field. They were not aware of the relevant issues and they had to ask the leader to give a reply.â€